To anyone out there who’s a fan of the Fantastic Four even before it hit the big screen, a question  – why did it have to be Jessica Alba to play Susan Storm?

That is Susan Storm 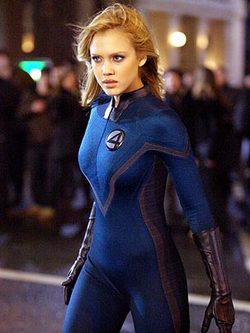 This is a Hispanic woman with her hair dyed blonde.

In the comics Susan was a Caucasian blonde. [I was going to include ‘buxom’ but i can’t be sure if that’s from actual childhood memory or pubescent fantasy.] Jessica Alba to my perception through the media, is not in her natural state Caucasian nor is she a blonde, and hardly what i would call buxom. So why her?

Does she also not look ridiculous all dark-skinned but with hair so obviously blonde out of a bottle? Or did her skin tan as she got her powers? I wouldn’t know coz when i saw her on the promotionals, I just got so put off from wanting to watch the movies. And never in the comics was there any suggestion that Johnny and her were only half siblings. Despite being The Human Torch, Johnny Storm might not be the brightest spark in the team but surely he’s smart enough to know that with Alba’s skin tone Susan could not be his biological sister. Unless it’s been an accepted fact that one of the Storms procreated interracially.

But no no, no – no such nonsense was even suggested in the comics. So why the Alba chick? To appease the Hispanic market? To allow for tanned or naturally darker skinned girls with dyed blonde hair to identify with the characters more? Or was it some hair dye company that wanted to get their product across to dark skinned lasses that blonde could be the way to look coz it says so in the movies? Or was it simply the sponsorers who would only go away quietly if they used Alba coz she seems to be popular in some way at the moment?

The only reason i’m ranting about it is coz i just had to watch the Rise of the Silver Surfer. I’ve known all along that when the right technology came along, SS would be the coolest character to bring to the big screen. And sure enough, it was. As for JA, I’m only glad i did not watch it in the cinemas coz then I would not have been able to fast forward whenever she came on. But those scenes where they had to have Susan with the Silver Surfer, she was so wrong for the part. It was just all wrong. Only right thing would probably be that she’s the one with the power of invisibility, of which she should have used more throughout the movie.