In my younger days,  I never consumed alcohol probably more or less for the same reasons youngsters at that age never took to downing the proverbial firewater – and that was due to the Divine Prohibition. Around that age it was just blind adherence to the faith. That however could have been easily broken up because no one gave any valid or sound reasons behind the prohibition other than the usual stories of spending all of eternity as fuel for fire. But as soon as I bore witness of those who do down the booze, I decided objectively and unequivocally that alcohol consumption is definitely not for me, because as soon as they cross the threshold of civil drinking into sheer assholicity, the jury’s decision is final– booze ain’t the bitchen bitch they make it out to be.

I don’t drink but I’m not intimidated by alcoholic beverages, which means I’m not so anal about it that I can’t be within splash distance from a drop of alcohol. Therefore, I end up being quite a regular companion to boozers, especially on Friday nights. Apart from being an inexpensive drinking buddy because I go for the non-alcoolisé beverages, I’m also the obvious designated driver. But the downside to that is that I’m also a boozers bestest friend in the whole world when they’re shit-faced. I’m the one they’ll get up close and personal to, all flustered with spit and fumes, ready to clue me in on the meaning/miseries of life. Whichever one it is, they’ll insist I’m the luckier one for it. Yeah I would be, because between us I’ve still got control over my faculties and even if I don’t blow out chunks of my insides soon, I won’t be waking up underneath furniture or around bathroom tiles with a desert of fur for a mouth and a tympani where a head should be. 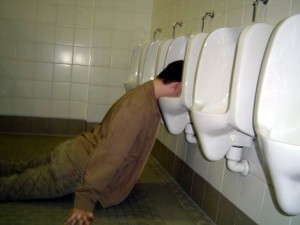 Or a urinal for where a face should be.

Of course I still get jeers and taunts by champions of the fermented nectar of the sods, especially hollow heads who consider alcohol consumption the epitome of higher culture or civilization. I do try to enlighten them that a person of my disposition who tends to do things to the extreme is just not good for such vices. I would have very high slosh potential if I started boozing and could easily end up a drunkard as easily as I ended up a chain-smoker once in a lifetime before.

However, that answer is never enough for them. They really want to get in on the religion angle. Well, I just simply establish that any religion that has a ban or admonishment for alcoholic drinks is merely banning the only beverage in the world that requires legalization.

Think about it – it’s the only beverage that prerequisites a legal drinking age; it’s the only one that has a roadworthy driving legal limit; sales of it is regulated and requires a license; open consummation of it is not globally allowed; nations made attempts to prohibit it, and I won’t even begin to go into the social crimes and issues that are directly related to it. You would not find any such parallel with the widespread consumption of say, caffeine – of which no religion has been known to ban. But of course to morons who need to fill their weight in booze, all that negativity only applies to others and it could never be them – they are the apogee of human restraint; which is probably what a DUI driver would have thought to themselves to have gotten behind the wheel after a ‘coupla’ glasses.