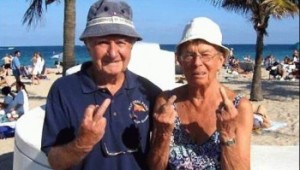 I don't believe that's due to arthritis.

I’ve always been suspicious of old folks for as long as I can remember.  I never start off intending to but I find myself not being readily capable of believing or accepting a lot of the things they say.  I never immediately question their intentions though; it’s just the way they carry their intentions out verbally that always seems dubious.  The things they say just don’t seem to make much sense and I could never really figure out where they’re coming from.  That’s always seem to be the way things are with old folks even as I grow older.  Now that I have become one myself I’m still suspicious of old folks.  So now that I am an old folk, let me check if I know enough to understand what’s behind it all; especially to ensure that I am not doing myself that which I doubt.  Consider this an inside scoop on old folks’ lies.

They don’t lie outright.  If you were to bluntly bring out what they say as lies you would genuinely hurt them.  So never do that if they are loved ones.  That’s because I don’t believe that they mean or even know that they’re lying.  Theirs is not about mere untruths, but more about the delusion of truth.  Let me try to put this into a list on what I have come to understand about the whys and the hows of Old Folks’ Lies.

And the list could go on and on, but I reiterate, them old folks are not intending to lie to us.  It’s just that they believe their version of the truth is the only correct one.  That’s understandable if you think about it as being ingrained within them throughout the years and carried them through their lives, or so they make themselves believe.

So, say that you go to them for advise because you believe that wisdom comes with age – there will be either genuine care and concern to help you out, or narcissist enjoyment on the egotistical fact that they are indispensible to others, especially the young ‘uns.  Either way, they will still dispense what they can with the best of intentions.  I have no doubt of that.  And it is definitely uncalled for to call them liars simply by the negative connotation of that word which does not apply to them by virtue of the sincerity of their intentions.  That means old folks may lie, but they are not liars

Therefore, if only liars lie that can only mean that they don’t, hence you will just accept everything they say as truth until such time you mature into your senses and realise that it was not  truth all along, and that is where you begin to see the fakery – the flimsy wooden props behind the monolith.

And sadly enough, there were those amongst us who just kick those props away to let the monolith come crashing down onto them, simply because they could not see the point in scaling it anymore.