It appears very much that the muslim world is once again up in arms over depictions and caricatures of the Prophet Muhammad, peace be upon him.  Of course when I say ‘up in arms’ I am using a figure of speech.  There are however many amongst my muslim brethren that do not use such a phrase lightly and are ready to use arms against those they deem responsible for such uncalled and unfair acts upon a beloved such as him, peace be upon him.  Angered as we may be over the callous portrayal of whom the Holy Quran refers to as the most beautiful of examples for mankind, I still do not feel that armed retribution is the proper method to get our wrath across, nor is it that any way to go about enlightening those responsible to the error of their ways.  And my stand is not a matter of adherence to scriptures or hadiths and sunnah.  That’s because I have yet to come across anything in the Holy Quran or in any of the Prophet’s sayings or ways that advocates such a course of action when an assault, abuse or injustice is done onto the person of the Prophet, peace be upon him.

“He is not strong and powerful who throweth people down; but he is strong who witholdeth himself from anger”

We muslims know that the Prophet, peace be upon him, never took any retribution nor even shown any anger over attacks onto his person.  All he showed was remorse and disappointment and even that was towards all the negativity against the message he was bringing.  And he was subject to all sorts of vicious abuse in his lifetime including attempts on his life by a gift of food laced with poison and even by the lethal attempt to drop an object onto him from a roof.  But he always stood his ground and maintained his steadfastness.  For his was all about the message and not the person.

We muslims also know that whatever fueled the motives to portray the Prophet in person as such can only be derived through ignorance.  Their actions indicate that they could not have given the Holy Quran a fair and objective understanding, nor did they allow for themselves a charitable reading of the broad spectrum of hadiths and sunnahs of the Prophet, peace be upon him.  They could not have known of the many shades and tones of the Prophet’s traits when he carried out his mission nor of his natural disposition which was very much suited for him to be referred to as the most beautiful of examples for mankind.  They would have been oblivious to the simplest fact that here was one who says that the smile is the simplest of gifts a person could give, and never failed to do so himself.

“Do not consider any act of kindness insignificant, even meeting your brother with a cheerful face.”

So if they do not know much of him, then what are their depictions and caricatures based on?  How did they get their image of the Prophet, peace be upon him?  What inspired them to think of him in the way they do, if they truly had no idea or got it all wrong?  Well, from what I’ve seen of these supposed images of the Prophet, peace be upon him, the illustrations actually look nothing like what has been known of him.  Like all the other prophets before, peace upon them all, no image exists of their respective persons.  We know that the image of Eesa or Jesus, peace be upon him, is not the actual image but a romanticized Caucasian’s portrayal of him.  But there are related descriptions of the Prophet’s appearances and by these accounts, those depictions or caricatures that they have made bears absolutely no resemblance to him at all.

So if caricatures are the art or style of exaggerated representations of a person in which certain striking characteristics are exaggerated, then who are these caricatures representing if there is no image of the person?  The illustrations that I have seen are turbaned, sharp featured, heavy browed, wide eyed and forever in a grimace.  That definitely does not bear any familiarity with the countenance of the Prophet that I have come to know, peace be upon him.  So where did they get the impetus to have come up with such an impression?  The caricatures however, more closely resemble the faces of more recent day mullahs, sheikhs and imams who have been widely known for their fatwas, decrees and ordinances.  And for someone for whom smiling came naturally even before he was a prophet, a grimace would not have been an accurate representation of the Prophet, peace be upon him. 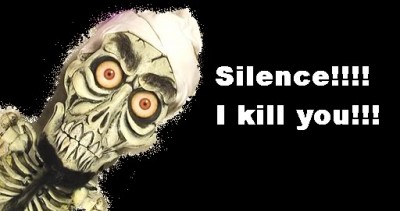 And what of the notion that he was a war monger, forever armed and ready to do battle with those who disagreed with him?  We muslims know that it took a long while and untold carnage against personal rights and property before he relented to fight against the jahilliyahs of Makkah, years after he had absconded to Madinah himself.  And he was not even building up an army during his sanctuary in Madinah as the troops that faced the Makkans at Badr was made primarily of the average denizens and were hardly battle savvy nor even ready.  His ever willingness to make written pacts and agreements is consistent with his decree of the pen being mightier than the sword.

And never forget that it is he who sought forgiveness from the Allmighty SWT, for those who have wronged and sought to injure him and his followers, pleading that they are only doing that which they know not of.  Such is the aesthetics behind the most beautiful of examples for mankind, peace be upon him!

The inspiration behind the caricatures that depicted him as a war monger seemed to be more akin to what we have come to recognise as present day jihadist – those who have come to believe it an act of the highest salvation to give their lives up in order to avenge any wrong done towards the Prophet, peace be upon him, or his ummah regardless of who is actually harmed in that act.  This is most definitely inconsistent with the Prophet’s request that no women, children, ‘men working in the fields’ or even trees be harmed during battle, and that the fighting only be directed at those who are doing battle against you.

It is not to be taken lightly that muslims in certain countries are suffering everyday at the hands of the callous and the conniving who use their intelligence to serve evil means and ends.  And this has driven many muslims to give up their patience and perseverance and chosen weapons over wits in order to overcome.  The Prophet, peace be upon him, was an intelligent and brilliant strategist to have won the many battles against him and his ummah.  But there doesn’t seem to be much in terms of intelligence let alone civility when it comes to the course of actions of the jihadist and their advocates.

“Shedding of blood will be the first matter about which judgment will be given on the Day of Resurrection.”

The recent failed attempt to cause damage and harm in Times Square of New York city was by a person who used fertiliser that could only burn but not explode and who was eventually outed by ubiquitous surveillance cameras.  More recently, a key Al-Qaeda figure accidentally blew himself up while messing with a bomb.   Then there was the embarrassing incident of the muslims who tried to use an SUV as a destructive missile by driving it into Glasgow International Airport only to be foiled by bollards. 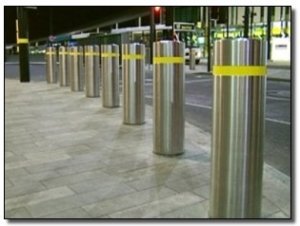 One of the protagonists even wound up in a position to get certain highly sensitive parts of him kicked by a local cab driver. 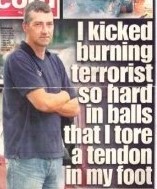 First the bollards, then the balls. Definitely not having a nice day.

And all this was after their first attempt was thwarted by their initial vehicle of mass destruction being simply towed away.

And many more of such embarrassing failures of those who have come to believe that salvation is to be gotten in such ways.  I wonder how soon will it be before these jihadist who have been prosecuted or perished will be replaced from amongst those who immediately raise their hands up when asked out loud for whom from amongst us are willing to die for the cause of Allah SWT.  As much as I can comprehend, the Prophet, peace be upon him, only called for the ummah to fight for that cause and not to just merely die for it.

“The most excellent Jihad is that for the conquest of self”

So it seems that our anger towards the so-called cartoons of the Prophet Muhammad, peace be upon him, might have been slightly misplaced.  It is not their depiction of him that should anger us, because they were nowhere near capable of representing his true person; nor could they distort his impeccable character because they were too ignorant of it to know what there was to corrupt.  But it is actually their depiction based on what they have come to be familiar about some present day muslims – and that they were besmirching the Prophet’s good name when they use it as a label for them – is why we should be livid all over.  In other words, the caricatures were actually cartoons of their general impression of us muslims, but they misplaced the Prophet, peace be upon him, to be a symbol for us despite many of us being far detached and remote from all that the Prophet Muhammad exemplified and stood for, peace be upon him.   After all, some of us go around assuring that Islam is of peace and harmony, while others go around threatening to kill those who disagree.

“It was said to the Rasul, ‘O Messenger of God! Curse the infidels.’ Muhammad said, ‘I am not sent for this; nor was I sent but as mercy to mankind.’”