Previously, I shared experiences from my return to the dating game. To briefly recap, I wrote it around the three different times a single working lady would have; namely, work time, free time and spare time. As much as I stated how admirable is their tenacity within each of their time segment, I did express a personal regret over how they use up their spare time especially for certain extra curricular activities, namely dating. They choose to spend date time by lamenting how hectic are the other two time slots, especially work time. And I should reiterate that my regret is borne primarily out of despair for lost opportunities in getting-to-know-you conversations. They instead make you experience vicariously how phenomenally full their work time and free time are. So if you want to get to know the person that they are, you’d have to infer it from the phenomena they describe to you. And in the fervor of the soliloquy on their oh-so-full daily lives, you’d not have much chance introducing the person that you are simply because you wouldn’t have had a chance to.

But if you’re cordial enough to let it pass without complain, you’d be entitled for second and further dates simply because you’re a good listener. So after all has been said before, it’s safe to assume that it would be much better on the second date or even subsequent dates, right? Well, if you can bear the first one, then you’ll be unaffected when they start the second or other dates by informing you on the chaos they had to endure between each date. The duration of updating you on how hectic they have been is directly proportional to the duration lapsed between each date. The average units would be 3.3 minutes of lament for every day that passes. Therefore, if you keep your dates weekly with the same person, you should not have to listen to more than 23 minutes of how busy they’ve been between rendezvous. As long as the time lapse between the two dates is not too long, the updates will be relatively short.

"You can never imagine the kind of morning I had, just before 10am."

One of the trademarks of a stalwart single working lady is that they’re never hesitant to speak out their minds and their determination to always be themselves. You needn’t have to use your deductive powers to know that, Sherlock. More often than not, they would have proclaimed those two traits out loud. Especially to ensure that you would not miss that about them.

So there you are baring your souls out to one another. She expresses observations and opinions as do you. If you are not wont to be part of the sheeple or associated with a herd mentality, you would have thoughts of your own. Alternative opinions. Different observations. Another point of view. I do. And much like the lady whom speaks her mind out and stays true to herself, I too speak my mind out and stay true to myself and share my alternative take on things. Surely that’s part of a fair and mutual exchange of ideas, right?

Well, in my case, apparently not. There seems to be a choking pause from the lady after I’ve had my say, and a strong show of consternation on her countenance. I seem to have drawn out the lady’s displeasure. And all because what I had to say was not in agreement with what she said. What gives? 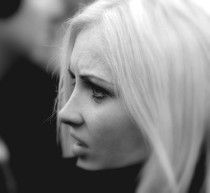 "What do you mean tomatoes aren't vegetables?"

But if the lady’s cool, she would allow me to explain my diverse points of view. And I’d be more than glad to, because after all, we’re sharing, right? Well, it seems not. The lady’s not so cool after all. She actually turns icy cold after I make my stand a few times. And she’ll call me out for being condescending, argumentative or just plain difficult. Or even wanting to be different for the the sake of being different. This despite me waxing lyrically the reasons why I have a different stance.

I have regularly been told that I can be passionate in conversation, especially on things I strongly hold on to or believe in. That’s the passion of my convictions. And I am asked to tone it down a few notches because some say that it makes me sound like I’m debating or arguing. But that seems terribly unfair. I can’t be myself then.

However, inversely, if the ladies express views different from mine, I’m always eager to know their thoughts behind it and would request for them. And they seem more than glad to tell all that they have to tell. And the more impassioned they are in the process, the more keen I would be to know more. After all, this is someone sharing something close to them that they really believe in. And it’s exciting. I’m intrigued. In my eagerness, I am prone to inundate them with queries or try to draw further out of them what they hold true to themselves. But after awhile, much to my chagrin, I find that I have crossed some line and stepped into something I was not aware of.

You see, at some point in such exchanges, the lady gets exasperated and really annoyed that I’m not stopping with the questions. She’s really cheesed off that I’m just not accepting what she’s saying after two or three explanations by her. Careless me. Now I am said to over-think things and unnecessarily getting too deep into them. And that makes her head ache.

Now, if the opposite of deep is shallow, then I find it incredulous that a person would censure you for wanting to be deep and would insist on remaining shallow. Trés bizarre!

I do not know where does the balance come in. Where is the line between just speaking out your mind and being yourself, before you’re called out and made to feel like a presumptuous dick? While they go on indefinitely speaking out their mind and being themselves, and they are perceived as being an independent, strong-minded lady. And when do you have to stop being genuinely interested in what they have to say, before you find yourself a threat to their mental health? Where are the lines to those limits?

I should point out here that this is not by any means my general impression of all ladies. Nor does it depress me because they do not encapsulate the entire lady population of my world. And before anyone brands me a natural born creep who is not conscious of his own faults, I will say that there are more in the circles of my life that do not respond to me in that way. That is to say, there are ladies in my life that do manifest actual pleasure with my company as I speak my mind out and be myself. There’s my daughters, students, a lady down in Brighton, and the ladies in majority whose paths I have crossed whom have graciously never dampened my spirits when I’m being myself. Bless ’em. And as I look around this delightful circle of my life, I realize that those who allow me to be myself have a common demographic factor.  They’re below 40.

My inference? Well, seems to me that when single ladies below the age of 40 like you, there’s a stronger chance that they like you for who you are. Whereas, single ladies above 40 will like you if you are more like them.

In a way, that does make neurological sense. But laters on that.